Whether the cycle takes place in or out of the oven the rocking action that is necessary to cover the internal surface of the mould wall is usually described as either bi-axial or rock ‘n roll. Bi-axial rotation moves the mould through any combination of full rotations of two axis and is unlimited in the recipe that allows the part to mould properly. Rock ‘n roll is limited rotation on two axis and the angle of the rock is vital for long narrow parts to ensure the powder pool covers the entire inside surface.

Carousel type machines usually use three or four arms on which the mouldsare mounted. These arms rotate the parts bi-axially and move from station to station on the machine being loaded heated cooled unloaded and loaded again ready for another cycle. These machines are excellent for energy efficient high production manufacturing. Carousel machines usually require the largest amount of available floor space.

Shuttle type’s machines will usually have two carts on either side of the oven on which are mounted arms which carry the moulds.These carts will move into and out of the oven in turn. While one cart is in the oven heating the other cart can be unloaded and loaded again ready for the next cycle. Shuttle machines usually require a smaller amount of space in the factory but may not produce as many parts as carousel machines. 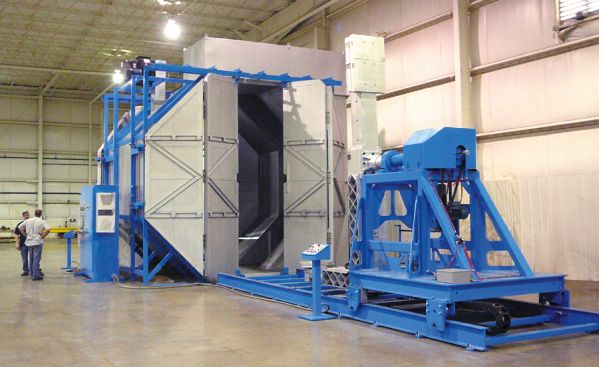 For certain applications open flame machinery can offer an effective return on investment. Cycle times are usually much longer on open flame equipment and parts can be more affected by ambient temperature. For some parts where placing the part in an oven would not allow even one more cycle per shift open flame equipment is a popular alternative.